Can Thailand Write Us a New Story for Nutrition Improvement in the 21st Century?

When I was first learning about nutrition, the community based model of nutrition improvement in Thailand was the “go-to” success story of how to reduce undernutrition rapidly and sustainably. The famous nutritionist Kraisid Tontisirin has been a great communicator and researcher on the Thai nutrition experience. So one of the big surprises of the Global Nutrition Report was to find Thailand off course on all 8 WHA nutrition indicators tracked in the report (under 5 stunting, wasting and overweight, exclusive breastfeeding rates, anemia in women, adult overweight, adult obesity and adult diabetes). 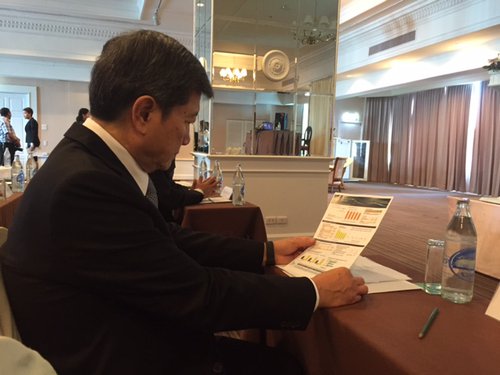 How could this be? Looking at the numbers more closely the three under 5 anthropometry indicators are driven by a 2012 MICS survey in the WHO database. That shows rising levels for these three indicators.

The GNR 2015 launch in Bangkok last week was an opportunity to discuss the issues: are the numbers telling a true story and what to do?

Before the launch the 3 co-chairs of the Global Nutrition Report (me, Corinna Hawkes and Emorn Udomkesmalee) met with the recently appointed Minister of Health who was about to give the keynote. He was visibly shocked at the conclusions drawn in the report: Thailand, the poster child of successful nutrition improvement efforts was “off course” across the board. To his great credit, his surprise was channelled in an entirely positive way--as we sat with him he was on the phone to his senior advisors asking then to comment on the data and the assessment. When he gave his speech he held up the 2 page Nutrition Country Profile for Thailand and said “this situation will change” and “nutrition improvement” will be one of the main priorities of his tenure. These promises need to be monitored.

So, what did our Thai colleagues think of the data? The MICS 2012 survey conducted by UNICEF in partnership with the Government (and released in 2014) was contrasted with a brand new Government survey which confirmed upward trends in wasting and under 5 overweight, but not stunting which was quite a bit lower. Reasons for the discrepancies? It was not clear. Perhaps because the MICS survey is not confined to Thai citizens unlike the 2014 survey. But both surveys indicated that 2 of 3 dimensions on under 5 malnutrition were worsening against a backdrop of stagnating adult anemia rates, slow improvements in exclusive breastfeeding rates and a worsening of all 3 adult overweight, obesity and diabetes rates.

For an economy as wealthy as Thailand, how can this be? Several reasons were put forward:

There are undoubtedly other reasons too, but it is surprising how little we in the nutrition community have to say about why some countries are doing better than others. Kenya and Ghana were two of the big success stories highlighted in the GNR 2015, but there is little consensus as to what were the key drivers of that change. We do need more research and analysis on the big picture changes.

The event was brilliantly led by Emorn Udomkesmalee and hosted by the Institute of Nutrition at Mahidol University. The launch events are valuable, I think, because they allow outsiders like me to present data with inconvenient implications; implications that those working in the country might find uncomfortable to share (my slides are here). This sparks conversations and hopefully action to get countries back on course. We wish the Minister of Health well in his attempts to do this for Thailand in the next few years.

Thailand wrote the book on undernutrition reduction in the 20th century. Now we look to it to write the 21stcentury book on ending malnutrition in all its forms by 2030.

This article is cross-posted from Development Horizons.