Kenya, Tanzania, Uganda, Rwanda, Ethiopia, Burundi and Zambia were all represented at the East African launch of the Global Nutrition Report 2015 (GNR) on December 7, 2015. Hosted in Nairobi by Kenya’s Ministry of health through the Unit of Nutrition and Dietetics, the launch brought together senior government officials; donor representatives; the business community; the academia and research network; nutrition experts as well as civil society organizations from across the region to deliberate on the issues raised by the report and chart the way forward. 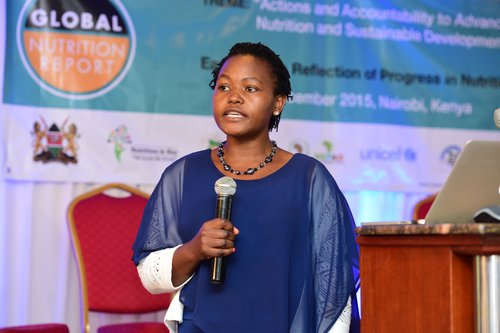 “The Global Nutrition Report is a tool that is used to assess progress in malnutrition, identify actions to reduce malnutrition and improve accountability,” emphasized Dr. Elizabeth Kimani-Murage, one of the authors of the report and a Research Scientist at the African Population and Health Research Center (APHRC) in her presentation of the overview of the Global Nutrition Report 2015.

According to the report, of all the East African countries represented at the launch, only one country: Kenya, is on course to meet all the five of the World Health Assembly nutrition targets for 2025 that were assessed by the Global Nutrition Report 2015 (for stunting, wasting and overweight in children under five years; exclusive breastfeeding for six months and anaemia among women of reproductive age). Kenya’s progress has been attributed to a number of success factors including enhanced government commitment, effective nutrition programmes, and general poverty reduction.

During the launch, it was unanimously agreed that such a success for Kenya is worth celebrating and other countries were challenged to work harder to improve on their progress towards the realisation of these targets.

Kenya’s Principal Secretary for Health, Dr. Nicholas Muraguri in his remarks at the launch hailed the progress achieved so far, but called for enhanced collective action from all stakeholders including government, donor organisations and the private sector, to endeavour to end malnutrition entirely by 2030. He reiterated the Kenyan government’s commitment to ending malnutrition and ensuring that all children grow up healthy.

“Every child in Africa has a right to basic nutrition, which if properly implemented at all levels, could reduce the levels of associated illness, incapacity and premature death,” Muraguri said. The country’s National Nutrition Action Plan 2012-2017 was cited as one of the key strategies that saw childhood wasting and obesity come down to four per cent. However, despite the progress in achieving the targets, nutrition funding is not well prioritized. “While Kenya requires more than 700 million U.S. dollars to implement her five-year National Nutrition Action Plan, the sad reality is that nutrition is scarcely featured in the national and county budgets,” said Mrs. Gladys Mugambi, Kenya’s Head of Nutrition and Dietetics Unit.

In the report, the rate of child stunting in Uganda (where children are too short for their age from under nutrition) has fallen from 48 percent in 1988 to 34 percent in 2012, and Tanzania reduced its rate from 44 percent to 35 percent in the ten years to 2014. It was clear from the GNR 2015 that each country has its own unique environment and that these are what causes the great differences in progress realised so far. These disparities can be turned into opportunities for combating malnutrition and it is upon all stakeholders to work together on this. 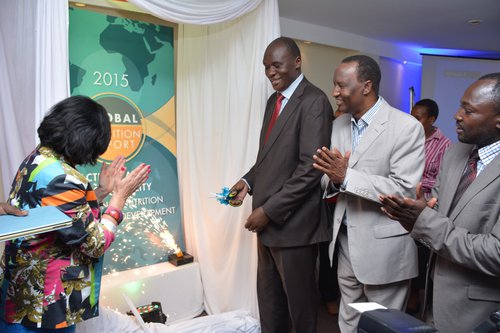 To be able to reverse the trends on malnutrition, it was evident at the launch that African countries must invest in this area. African countries should walk the talk and honour their commitments as per the Maputo Declaration on Agriculture and Food Security that called for increased budget allocation for food security.

Experts and stakeholders at the launch agreed that despite the recent progress in ending malnutrition with a number of bright spots across the continent, it remains a major barrier to development in many African nations. They resolved to create a political environment conducive to nutrition-improving actions; make committed investments in high-impact, cost-effective nutrition interventions; and to adopt a multi-sectoral approach to nutrition advancement.

The launch ended with government representatives and partners jointly signing a commitment to: achieve the World Health Assembly Global Nutrition Targets by 2025; double the share of budget allocated to improving nutrition by 2020; make and implement commitments at the 2016 Nutrition for Growth Rio Summit; and end malnutrition by 2030.

For the full report of the event, click here.