Let’s close the gaps on food fortification – for better nutrition

Fortification of staple foods with essential vitamins and minerals is a proven, cost-effective and sustainable way of reaching large numbers of people with vital nutrients. Large-scale fortification involves adding small amounts of vitamins and minerals to widely consumed foods and condiments. Fortifying salt with iodine, for example, prevents irreversible brain damage in young children, while fortifying flour with iron and folic acid helps protect against iron deficiency anaemia, a major cause of maternal death, and neural tube defects, respectively.

The evidence confirms that food fortification programmes in low- and middle-income countries improve a range of micronutrient deficiency-related outcomes. Large-scale food fortification has substantially increased the availability of nutrients – including iron, folate and vitamin A – in several regions globally.

The most striking success story is that of salt iodisation. Over six billion people consume iodised salt. It is credited with preventing 750 million cases of goitre over the past 25 years.

Over 100 countries have national salt iodisation programmes. Beyond this, 86 countries mandate at least one kind of cereal grain fortification, and over 30 legislate for fortification of edible oils, margarine and ghee.

A preliminary assessment by the Global Alliance for Improved Nutrition (GAIN) suggests that around 75 more countries stand to benefit from new public health programmes to fortify foods.

Many countries now have programmes in place, yet data on the quality and household use of fortified foods is limited. Recent estimates suggest that only half of foods marketed as fortified adhere to national standards. While data is still patchy (as is the case with many nutrition interventions highlighted in the 2018 Global Nutrition Report), GAIN and its partners, including the Food Fortification Initiative and the Iodine Global Network, are working to help fill some of the gaps.

In 2013, GAIN developed the Fortification Assessment Coverage Toolkit (FACT) to generate much-needed information on the coverage and quality of fortified foods. Between 2013 and 2017, FACT surveys were conducted in 16 low- and middle-income countries.

The results have revealed that while in many places food fortification has high potential to reach vulnerable populations (including women and young children, those living in rural areas and those living in poverty), this potential is not presently met, owing to poor programme coverage and compliance. 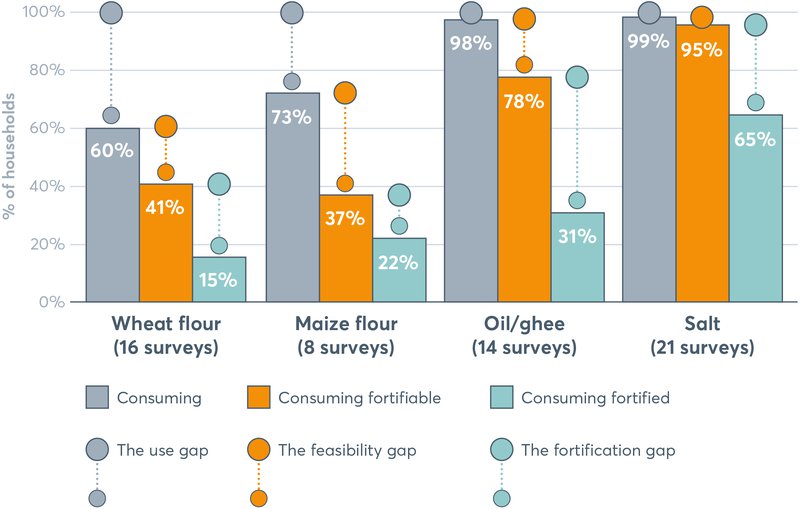 The use gap represents the proportion of households in a population not consuming the food vehicle chosen for fortification. This gap highlights the extent to which foods that are widely consumed have been selected for inclusion in a programme.

The fortification gap represents the difference between the proportion of households that consume the fortifiable food and those that consume it fortified. This gap highlights one element of effective implementation.

A fourth gap, not shown, can also be identified. This is the quality gap – the extent to which any fortified food consumed is fortified to national standards. Where these gaps are large, greater monitoring and enforcement may be needed.

Building on the 2015 Arusha Statement on Food Fortification, the Global Alliance for Improved Nutrition’s 2018 briefing paper sets out this unfinished agenda on food fortification, along with a five-step strategy to tackle it.

Donors, industry, national governments, consumers and civil society all have roles to play – in funding, compliance, monitoring, and in holding those responsible to account. Estimates suggest another $150–250 million from donors is required before 2030 to complete the food fortification agenda.

Sustainable Development Goal 2 aims for the end of hunger and malnutrition for all by 2030 – closing the gaps on food fortification is essential to the success of this effort.

In this chapter, we highlight three areas that have emerged in recent years as critical for the burden of malnutrition: the need to improve the prevalence data on micronutrient deficiencies, to take a new approach to addressing malnutrition in all its forms during crises, and to build on the emerging focus on malnutrition among adolescents. The chapter provides insights into the state of play and identifies some elements of progress that could be built on into the future.

The urgent need to improve compliance of national fortification programmes