On August 4, world leaders will come together in Rio de Janeiro to highlight progress made in achieving nutrition targets since the last Nutrition for Growth summit in 2013. The following excerpt from Chapter 1 of the 2016 Global Nutrition Report highlights Brazil's success in making commitments to ending malnutrition—and the challenges it has faced in turning those commitments into action.

Brazil’s political commitment to promoting nutrition in various forms, which has unfolded over several decades, rests on the engagement of civil society, intersectoral governance structures, and data and evidence. This applies to commitment to different aspects of malnutrition over time: food and nutrition security, obesity, and breastfeeding. The story is overall positive, but Brazil has work to do to address remaining and emerging challenges: exclusive breastfeeding rates remain inadequate, anaemia is high, and rates of obesity high and rising. Continued political commitment in Brazil will be essential to addressing these challenges. 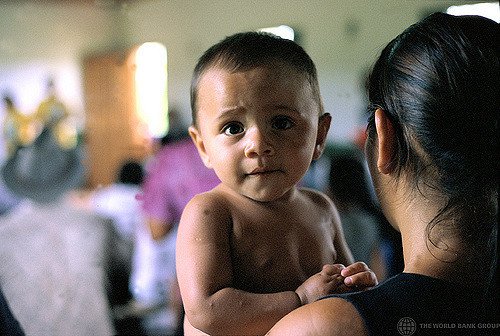 A mother with her child at a workshop for farmers in Vila Da Canoas, Brazil. Credit: World \Bank Group

Much of the impetus for this political support came from the ground up, through nongovernmental organizations and social movements. Since the 1950s these civil society groups had actively campaigned for food security. As they mobilized, their work led to the first National Food and Nutrition Conference in 1986. At that conference, the goal of food security was officially modified to become “food and nutrition security,” placing nutrition far higher on the political agenda. In 1996, Brazil’s official delegation to the World Food Summit in Rome had members from both government and civil society (CONSEA 2009). One of the outcomes was the 1998 establishment of the Brazilian Forum on Food and Nutrition Security (FBSAN), a national association of social organizations, researchers, government staff, and other professionals. This forum was key in opening up space for policy dialogue, mobilization, and innovation between civil society organizations. These entities were united in believing in the importance of policy and the institutionalization of programs for the sustainable achievement of the right to food.

Political commitment grew with the election of a government that prioritized food and nutrition security. In 2002 President Lula da Silva came to power having promised to end hunger. He set up a ministry—the Ministry of Social Development and Fight Against Hunger—to implement that promise, and in the process many prominent members of civil society organizations were appointed to public office. The Zero Hunger program was set up not just as a social program, but as a model of economic development: the idea was to increase the demand for food to address household food insecurity—such as by increasing purchasing power through the Bolsa Família cash transfer program and enlarging the school meal program—while addressing the poverty of Brazil’s family farmers, who were the main source of food (FAO 2002). The policies linking family farming and food security are highlighted in Chapter 6 (Panel 6.2) of the GNR.

The next critical step was the development of a governance space for engagement between government and civil society. In 2002 the National Council for Food and Nutrition Security (CONSEA) was re-established to bring together members of civil society—many from FBSAN—and government. CONSEA was the source of many of the laws and policies in Table 1.2, and it, along with FBSAN, was behind the campaign for the right-to-food law (LOSAN), passed in 2006.

Intersectoral governance spaces within government followed. After the passage of LOSAN, the government established the National System for Food and Nutrition Security (SISAN), which brought together two coordination bodies: CONSEA and the Inter-ministerial Chamber on Food and Nutritional Security (CAISAN). Together they incorporate 10 ministries and special secretariats, including education, agrarian development, science and technology, and human rights (Chmielewska and Souza 2011). It was SISAN that enabled the effective coordination, implementation, and monitoring of the public policies (Table 1.2).

Throughout this process, the investment in and use of data and evidence have played a key role. In the 1990s, Brazil’s Institute of Applied Economic Research (IPEA) drew up a nationwide hunger map showing that there were 32 million destitute people, accounting for more than 20 percent of Brazil’s population (IPEA 1993, cited in Chmielewska and Souza 2011). It is now proving crucial as the government moves to address the remaining food and nutrition insecurity in the country through the development of a Traditional and Specific Population Map.

The same factors helped boost Brazil’s much more recent political commitment to preventing obesity. The first factor was evidence. Throughout the 1990s and 2000s, the country focused on reducing hunger and stunting, even though obesity rates were high and getting higher. But comparable and repeated national surveys illustrated the magnitude of the obesity problem and the speed of its onset. Although some key government actors initially resisted the move to address obesity, government institutions and other stakeholders used their funding, influence, and coalition allies to pursue new policy objectives related to preventing obesity and promoting healthful diets.

Second, the intersectoral nature of the fight against undernutrition prepared Brazil for an intersectoral fight against obesity. In 2014 CAISAN developed the Inter-sectoral Strategy for the Prevention and Control of Obesity to integrate existing sectoral actions and new initiatives, increase the consumption of healthy fresh and regional foods, and decrease the consumption of ultra-processed foods. That strategy calls on the Brazilian states and municipalities to implement many of the actions.

Third, there has been active dialogue between the government and civil society, such as through CONSEA and the National Health Council (Conselho Nacional de Saúde, or CNS), in formulating public policies. One result is the 2014 publication of the new Brazilian Food Guide, which emphasizes freshly prepared food. Nevertheless, key challenges for obesity control remain. Introducing regulatory reforms has proved challenging. Despite efforts to restrict the marketing of high-fat, -sugar, -salt foods to children since 2004, the government has failed to do so. This experience points to the need to build a broad political consensus among the government’s executive, legislative, and judicial branches and to build new social norms.

Brazil’s only example of nutrition-related industry regulation is the law on the marketing of breastmilk substitutes—a hard-fought achievement in the country’s commitment to exclusive breastfeeding in the first 6 months and its continuation with healthy complementary foods till the second year or beyond. In the early 1980s, exclusive breastfeeding rates were extremely low in Brazil—just 2 percent—but the country was already showing a commitment to improvement. One aspect was greater coverage of antenatal care, and another was the translation of the International Code of Marketing of Breast-Milk Substitutes into law. Brazil played an important role in preparing and finalizing the code in 1981 and that same year launched its own program to promote breastfeeding.

In 1988, Brazil adopted its own code on the marketing of breastmilk substitutes, which was initially implemented as a health standard. In 2006 the code was turned into Law 11265/2006. Like all legislation in Brazil, however, this law could not be enforced until it had undergone a process called “law regulation.” The process lasted nine years and 10 months, and on November 3, 2015, the decree was finally signed (Brazil, Presidência da República 2015). Throughout this process, the infant-feeding industry strongly opposed the legislation and made numerous attempts to weaken it. Countering this strong opposition were active efforts by civil society. The International Baby Food Action Network–Brazil (IBFAN) was the lead actor, lobbing for the legislation, contacting the Brazilian president directly, and monitoring violations. CNS also played a key advocacy role in the 1990s, and more recently, through CONSEA, after a member of IBFAN–Brazil joined in 2014.

Despite these successes, very significant challenges remain. Exclusive breastfeeding rates in Brazil remain low compared with other countries (see Chapter 2 of the GNR); the quality of antenatal care is poor; and violations of the 2006 law continue—a study in 18 cities found 227 violations, including illegal advertising and inappropriate labelling, by 52 companies (IDEC 2016).