Tackling the global obesity epidemic: Fiscal policies and the secret to a successful sugar tax

Overweight and obesity are two forms of malnutrition that have increased rapidly since 2000. Currently, 38.9% of the world’s adult population are overweight or obese, with dire implications for the future health of the world. Despite this, policies addressing obesity have generally been slow to catch on. But there is a growing body of evidence that shows what is working.

Obesity is a major risk factor for a range of non-communicable diseases (NCDs), including cardiovascular disease, hypertension, stroke, diabetes and at least 12 different types of cancer. And it’s not just rich countries that are affected. Increasingly, overweight and obesity are becoming present in low- and middle-income countries, often coexisting alongside undernutrition and stunting – known as the double burden of malnutrition.

Immediate action must be taken to improve the health of millions of people globally. But what should be done?

A comprehensive package of action

Obesity is caused by a range of environmental, social and psychological factors. The Global Nutrition Report 2018 states that governments must step up to implement a comprehensive package of effective policies and programmes to enable and encourage everyone to adopt a healthy diet.

It’s clear that there is no single silver bullet that will solve the obesity epidemic. At World Cancer Research Fund International (WCRF) we have developed an innovative policy framework called NOURISHING. Each letter in the word NOURISHING represents one of ten policy areas where governments must act if they are to reduce obesity and diet-related NCDs. One of the areas within the framework focuses on taxing unhealthy foods and beverages, otherwise known as fiscal measures: the letter ‘U’ stands for “Use economic tools to address food affordability and purchase incentives”. 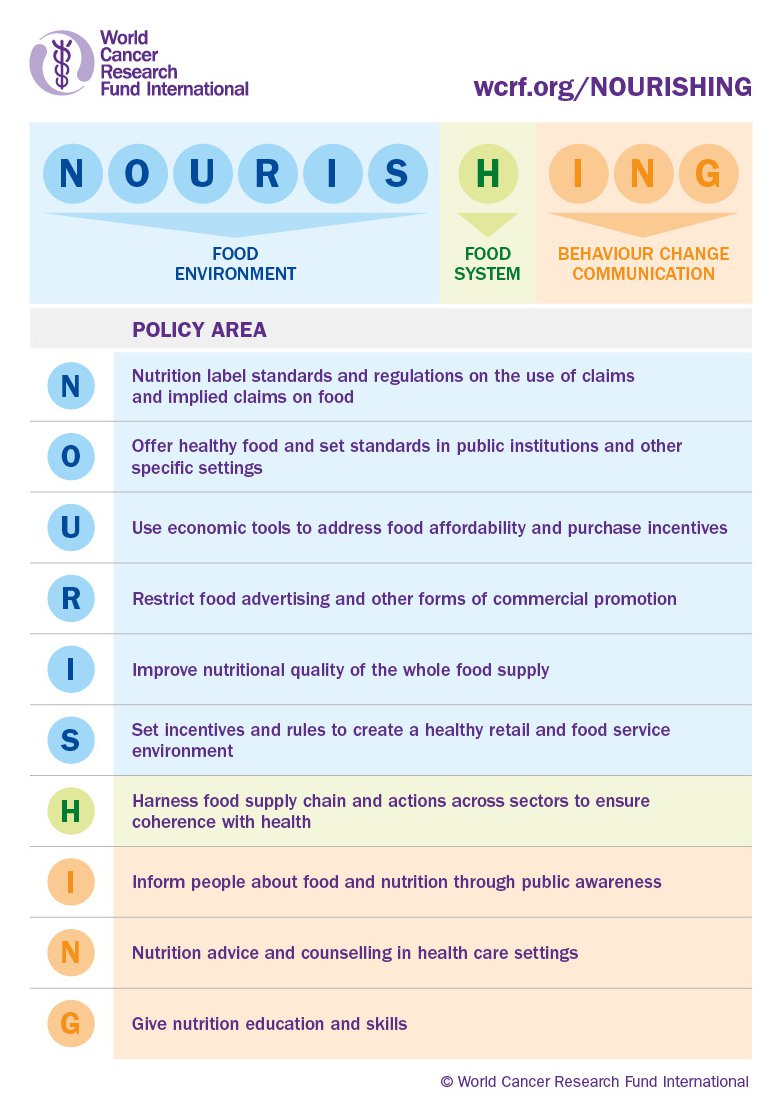 Research and policy evaluations have demonstrated that taxes increase price, decrease purchases and reduce consumption of unhealthy food and drink.

In addition, taxing unhealthy products can influence positive change by leading to the reformulation of products to remove some of the sugar, salt, fat or calories. It can also increase public awareness of the health risks associated with unhealthy foods, and can even help raise money to support specific programmes (such as tackling childhood obesity or improving the quality of drinking water).

The passing, implementation and subsequent evaluation of Mexico’s sugar-sweetened beverage (SSB) tax acted as a tipping point for global action on taxing sugary drinks. SSB taxes, or sugary drink taxes, are included in the World Health Organisation's "Best Buys" as an effective intervention, meaning they have proven efficacy.

Examples of the successes of sugary drink taxes from around the world are highlighted in the WCRF report, Building momentum: lessons on implementing a robust sugar sweetened beverage tax. One example is Berkeley, where an tax of 1% per ounce of sugar decreased consumption of sugary drinks by 21%. 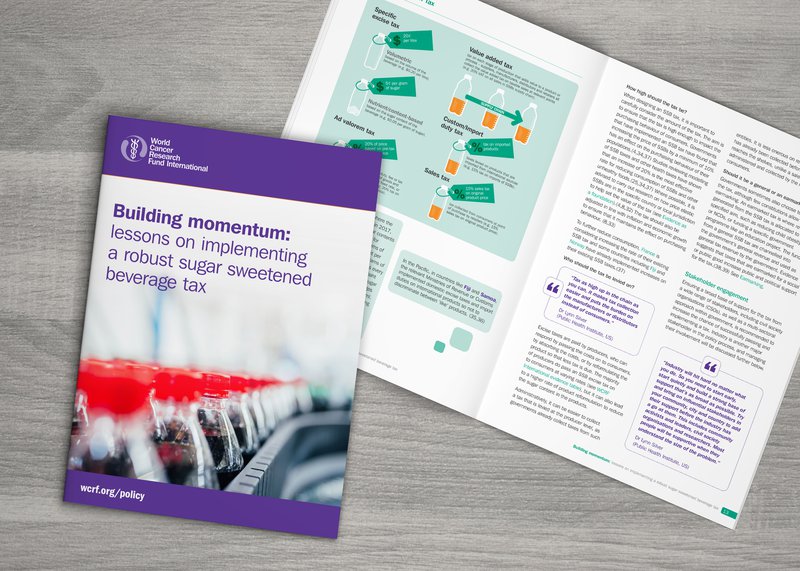 Designing and implementing a robust tax can be challenging, as taxes are vulnerable to industry interference and a lack of political will can derail the process.

In researching the Building momentum report, we reviewed key global literature and interviewed academics, policy makers and civil society to get their experience of designing, defending, and implementing a robust sugary drinks tax. Sharing insights from a range of actors and real life examples from around the world, our report offers practical advice to support policymakers when trying to implement a sugary drink tax, including how to defend the tax against opposition and avoid legal pitfalls. 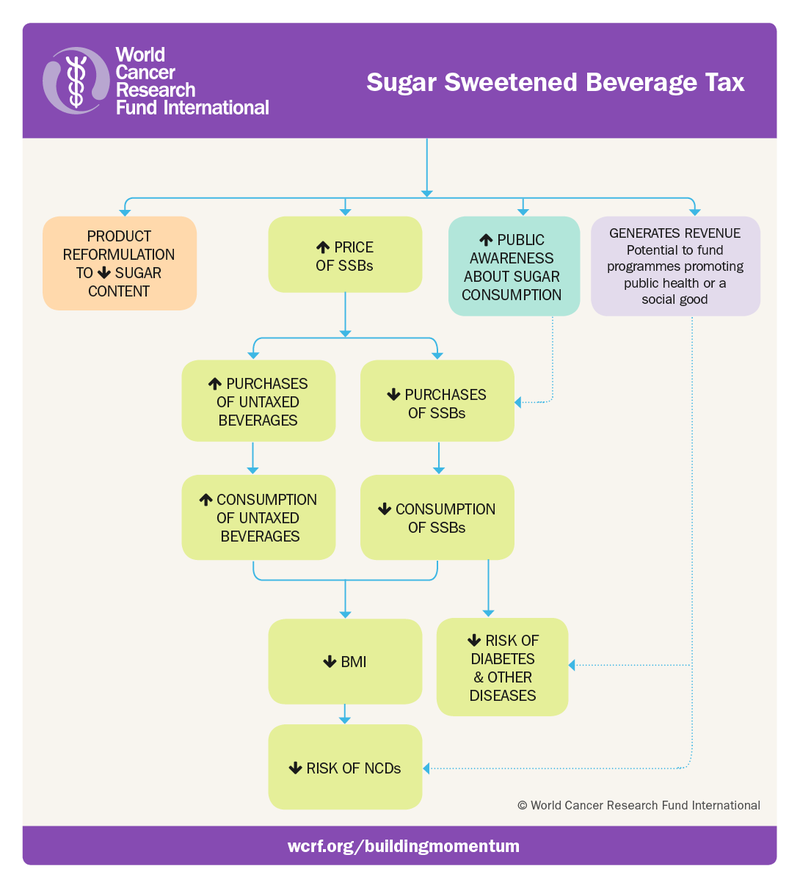 Some tips include being prepared with evidence and carefully considering the local context to tailor the policy to the local environment. Other tips include using expert advice to ensure a robust tax. Securing support from civil society organisations and government departments early in the process has also proven to be highly beneficial. Policymakers also highlighted the importance of framing the tax as a social good and as an investment.

In the example of Mexico, the National Institute of Public Health gathered evidence to support the tax, and civil society actors ran public campaigns to support the reforms. Evidence of the high prevalence of NCDs in Mexico and the resulting reduction in government revenue helped to make the tax attractive, leading to its implementation as part of a wider fiscal reform.

What can you do?

Check out our NOURISHING database, which houses over 500 national policy actions from around the world, to explore the kinds of taxes countries are implementing. In December 2019, we added eight new policies and four new policy evaluations to the database, which included a sugary drink tax in Seychelles and Malaysia, and an evaluation of such taxes in Spain.

World Cancer Research Fund is part of a network of cancer charities with a global reach, funding vital research into diet, weight, physical activity and cancer, helping people to make fully informed lifestyle choices to reduce their cancer risk. We use our global voice to influence health policy at the highest level. We are trusted advisers to governments, the United Nations, the World Health Organization, and other organisations around the world.

The views and opinions expressed in this article are those of the authors alone and do not represent the official position of the Global Nutrition Report or associated individuals, institutions and organisations, unless explicitly stated.

Chapter 04: What people eat and why it matters

In this chapter, we highlight the importance of diet as cause and solution of the global burden of malnutrition. To do so, we explore new and emerging data on the state of diets around the world.

Read more in Chapter 4: What people eat and why it matters

Chapter 06: Conclusion: Critical steps to get nutrition on track

This year’s Global Nutrition Report shows advances in policy and actions, commitments and financing, and data collection and analysis, while also highlighting the immense challenge of tackling malnutrition in all its forms. The past five years have seen some gradual but welcome progress on nutrition.

Read more in Chapter 6: Conclusion: Critical steps to get nutrition on track

Learning from success: What’s working in the fight against malnutrition?

New voices in advocacy: why young people are speaking up for nutrition