What can the Philippines do to Accelerate Nutrition Improvement?

This article is cross-posted from Development Horizons.

The Philippine launch of the GNR, brilliantly organized by the Government of the Philippines and UNICEF, was timely (slides here). The country is coming to the end of its current economic development plan as well as its nutrition strategy and new plans are being developed for the 2017-2022 period. The GNR data, messaging and calls to action were all cited by the National Economic Development Agency (NEDA) and the National Nutrition Council (NNC) in the Ministry of Health, as useful inputs into the process of developing the new plans. In addition the Philippines is a relative newcomer to SUN (it is the 51st member) and is just setting up its networks, so GNR messages and data were also able to be fed into the development of their workplans. 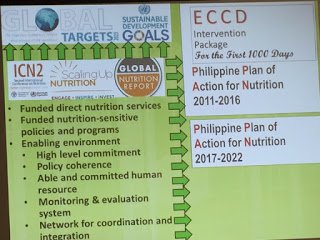 The nutrition situation in the Philippines is mixed. The latest survey shows stunting rates have declined at a rate rapid enough to put the country on course to meet the global WHA goals—but only if that rate of decline is maintained for the next 10 years. Under 5 overweight is below the WHA 7% threshold, but it is increasing, and so the GNR assigns an “on course, at risk” assessment. All other WHA indicators are off course, including adult overweight, obesity and diabetes. 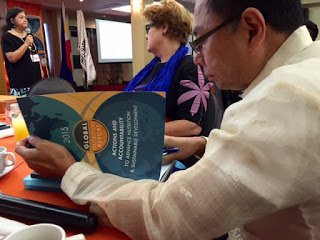 There is some optimism, though. There is a new Early Childhood Care and Development programme which has been allocated about $6 million by the government. The ongoing conditional cash transfer programme is seen as a promising avenue for scaling up nutrition BCC. NEDA, the economic planning unit, understands the role of nutrition as a maker and marker of broader development processes. Finally, the commitment and experience of the amazing NNC leadership, staff and broader set of stakeholders (including the Undersecretary of Health, Dr. Gako) is clear to see.

However there are some big challenges:

These challenges could be turned into opportunities. For example:

Among many great comments from the floor, one stood out for me because it gave me pause for thought on the politics of data. One participant said that the “on course” assessment of the country on stunting might make it harder for her to make the case for funding for nutrition. I replied that the rates are still very high and that people like to invest in things that seem to be working, but still, we need to be careful of unintended consequences of our actions.

I have a soft spot for the Philippines-it is where I did my fieldwork for my PhD 30 years ago (in Bukidnon Province, Mindanao) and so it was great to be back again. I just hope we don’t have to wait 30 years to get stunting rates below 10%. With all the advantages the country has it could get there in half the time.